According to UNFPA data, the factors responsible for child marriage include poverty and economic instability; Gender discrimination; Land-deposit or property contract; Protect the honor of the family; Common customs or practices; And insecurity, especially during war, famine or pestilence. There are other reasons – building a strong bond between two families through marriage. The reasons for child marriage causes are discussed in more detail below:

The practice of marrying a girl during the marriage has been going on since ancient times, which is still prevalent in some parts of the world. In this case, the guardian confers property on the daughter’s marriage, which is a financial threat to most families. The barrier to raising and maintaining wealth for the dowry is simple. Therefore, the daughter’s family is quick to get married, irrespective of the age of the girl, with the addition of some cash or land.

The practice of dowry is also prevalent in the case of girls. However, it is called the bride price or betting. In this custom, the groom gives the bride’s money to persuade the bride’s family to marry. In some countries, the lower the age of the bride, the higher the value of the betting on it. Due to this custom, the family of the daughter was forced to marry the girl quickly and to the highest bearer. This is how families look for a source of income in a weak economy.

Social insecurity is one of the leading causes of child marriage worldwide. For example, if a Subalika in Nepal (above 18 years) is single, it is a scandal in the eyes of society. Fear of organizing other crimes, such as rape which is not only a disaster for a girl, but also reduces her acceptance and degradation in society. For example, girls are not considered married unless they are virgins. According to some prevailing traditions, single women may embark on a taboo, or flee in secret, which is shameful for the family, or poor families may not find suitable shelter for their adult daughter within their socioeconomic group. Because of all these fears and social pressures, early marriage is high.

For poor families, girls are financially burdensome, so marriage is done at an early age so that both families and girls can benefit. Poor families consider marriage as the only way to protect their finances from being unable to provide for the girls. Reviewing Jewish history, experts agree that child marriage was high because of poverty, lack of proper shelter, uncertain social and economic conditions.

One of the reasons for early marriage is that parents believe that marriage at a young age means ensuring security. According to parents, marriage protects girls from free sex and sexual intercourse. However, in reality, younger girls are married to older men, which increases their risk of sexual transmission. Married women are more prone to HIV or HPV virus than unmarried girls.

Although in most countries the minimum age of marriage is 18 years, in many countries the exception can be made with the consent of the guardian or judge. Such laws are not limited to developing countries or state religions. According to the pastoral law of 1983, the minimum age for marriage was fixed at 16 years for boys and 14 years for girls. In 2015, Spain passed the minimum marriage age of 14 to 16. In Mexico, marriages below the age of 18 can be arranged with the consent of the parent, but for that, the daughter must be at least 14 and the boys 16. In 2012, the family law in Ukraine amended the marriage law of a boy and a daughter to 18, but subject to the court’s decision, the marriage can be done in 16 years if it is good for both the boy and the girl.

Child marriage is allowed in most US states with the permission of the courts. The minimum age of marriage in Canada since 2015 is 16 years. In the UK, England and Wales, and Northern Ireland, parents are permitted to marry in the case of a 16-17-year-old boy. In Scotland, the age of the guardian is not required. However, if you are married below 16 years, it will be considered invalid under the Marriage Act of 1973.

In a country where the minimum age of marriage is low, it is not always right to have a low marriage rate. However, there is a correlation between age limited by law and the average age of marriage in a country. In Islam, Shariah law is given priority, not civil law, in the main countries. According to the UNICEF report, the top five countries in the world have the highest rates of child marriage – Niger (75%), Chad (72%), Mali (71%), Bangladesh (64%), Guinea (63%). And Islam is the main state of each of these 5 countries.

In 1697, Louise was married to 12-year-old Mary Adelaide, 15, the future heir of France. The reason for this marriage was political unity.

Child marriage often depends on socioeconomic circumstances. Child marriage was one of the methods of political settlement when feudalism was practiced in ancient Europe. Early marriage strengthened economic or political bonds among elite families. And it was through marriage that there was an agreement between the two families, whose breakup would create the possibility of a devastating effect between the two families.

Social disasters, such as war, military operations, conversion, forced captive and enslaved locals, arrest and forced deportation – are difficult to obtain due to these reasons. Before the events go out of control, the daughter’s family is in a hurry to get an acceptable pot.

According to a New York Times report and some researchers, the origin of child marriage causes in India dates back to 1000 years, when Muslims invaded India. The invaders raped or plundered virgin Hindu girls, causing the Hindu community to marry at an early age to protect their daughters and children. 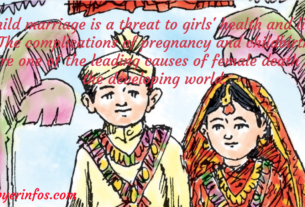